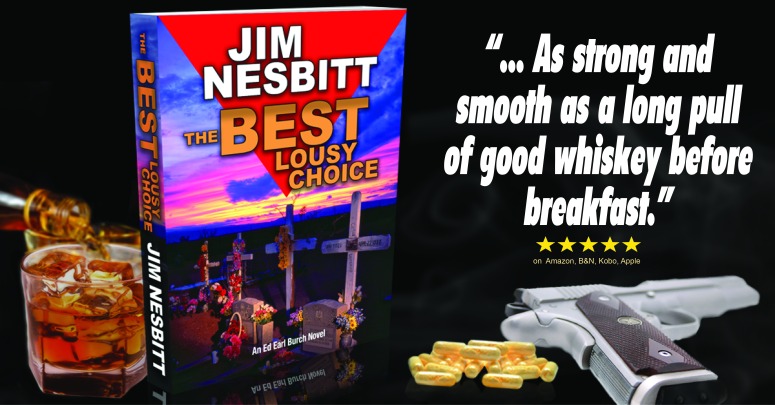 Another crackerjack five-star review of THE BEST LOUSY CHOICE by fellow Athens writer John Davis, author of two books of very fine and wide-ranging essays, stories and vignettes based on but not limited to his experiences as a Cold War military intelligence officer, RAINY STREET STORIES and AROUND THE CORNER. Check out John’s review below, then see whether he’s right at https://www.amazon.com/author/jimnesbitt

“Take another plunge with Ed Earl Burch into the badlands of a tough, corrupt West Texas county where violence is a virtue and truth is hard to find. Ed Earl is a tough Dallas homicide cop bounced from the police force.

Why he does what he does as a PI emerges slowly, as does his character. It’s like watching a nervous rattler as it decides to strike, or not.

Jim Nesbitt is a former newspaper reporter who personally covered this spikey, secretive, and brutal part of Texas. A real hard nosed investigator, Nesbitt knew truth was often buried with guns to protect even its grave. Here he offers another ‘catch you by the belt to get your attention’ Ed Earl Burch tale of bad men, scary women, and a countryside to match. A story where even doing right leaves you a lousy choice.

Ed Earl lives where justice might be what just blew a man’s head off. This time, mystery wraps itself around a burned barn with an enemy-ridden, tough Texan inside. Hired to find out what happened, Burch meets a cast drawn from a list you might find in a state maximum security prison. Could even the man who wants Ed Earl to investigate be the killer?

You’ll match wits as Ed Earl follows clues through tough streets of dusty towns, to fine offices of men who subvert the law, to broken up shacks where only bullets and buzzards speak. Throughout, you’ll be rewarded because of the masterful writing Nesbitt deploys. You concentrate like Ed Earl, who has to figure out what lies, schemes and plots even the most trustworthy seem to be working. And all this before another back shooter blasts away.

Nesbitt makes you feel the hard, dry heat rising from the high desert rocks and the sharp thorns of the twisted scrub. You’ll find yourself in a land where the mysteries come like unexpected thunderstorms and the double-cross should be the brand of many a ranch.

You’ll meet hard-bitten characters with secrets they murderously protect. As with all of Jim Nesbitt’s Ed Earl tales, you’ll be drawn to a Svengali with rattlesnake eyes, compelled to hold on like it’s your last good poker hand and won’t be let loose till the last bullet is fired and the final body falls; with characters you’re happy to meet and those you’d like to see dead.

This gun-slinging crime thriller plays for keeps. Buckle up, you’ll like this.”

One thought on “A Cold Warrior’s Tout”