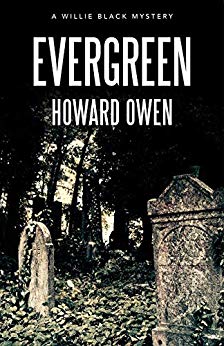 If you ever worked at a newspaper, you knew a guy like Willie Black. Hard-nosed and obsessed when chasing a story. Hard-drinking whether he was on the hunt or not. More ex-wives, back-street lovers and one-night stands with other reporters than Tanya Tucker’s had hot meals.

A smartass who never knew when to shut up. To bosses, cops or pols. Might get him demoted from the capitol beat to night cops, but he was too good a reporter to fire.

Newsrooms used to be full of guys and gals like Willie. Back when print journalism was lively, vibrant and bawdy fun. Back before newspapers went the way of the buggy whip and the steam locomotive and newsrooms became dead zones of empty desks and survivors doing the jobs of four or five of the departed.

Willie’s old school, pushing 60 and too stubborn and scared to change. Along with last night’s booze, Willie oozes authenticity. Which is why Howard Owen’s most durable character is so compellingly believable, book after book, a tribute to the author’s own ink-stained career.

In Owen’s latest book, Evergreen, Willie’s latest obsessive story chase is his own legacy — the black father he never knew, killed in a one-car wreck on a back road when Willie was a toddler, leaving him to be raised by his white mother in the most redneck enclave in Richmond, Va. He grew up during the deeply segregated early 60’s, when it was illegal for whites and blacks to marry, the Klan was a lethal terror and a mixed-race child was a shameful thing.

Willie, a survivor who has learned to skate through both the white and black worlds, has never bothered to learn about his father. That changes when Philomena Slade, a dying aunt on his father’s side who Willie reveres like a grandmother, gives him a last request — keep his father’s grave clean, a task she has been performing for decades.

Willie’s father, Artie Black, a jazz sax player and proud black man, is buried in a graveyard called Evergreen. It’s a remote, nearly-forgotten place, a “colored” burial ground overgrown with brush and littered with toppled tombstones — except the graves of a dwindling number of souls who still have family members alive who keep them clean.

At first, Willie reluctantly honors his aunt’s request — but little more. Gradually, curiosity kicks in and he starts asking his mother about his father. Her answers skim the surface as she talks about being smitten by his looks, musical talent and charm, but offer little more.

He tracks down two of his father’s running buddies — old men now who talk about deep friendship and fun times, but also darkly allude to his father’s penchant for trouble and his refusal to bow down to the white man, a fatal flaw in those times.

Willie can smell a story, but every time he pushes a little harder, the old men clam up. There’s a buried secret there and Willie is determined to dig it up, a quest that uncovers murders, betrayal, racist cops, Klansmen and the descendants of men with blood on their hands that want to shut Willie down.

He’s always been willing to pay the price for the truth he seeks. But this time, the cost includes pain and suffering for those Willie loves.