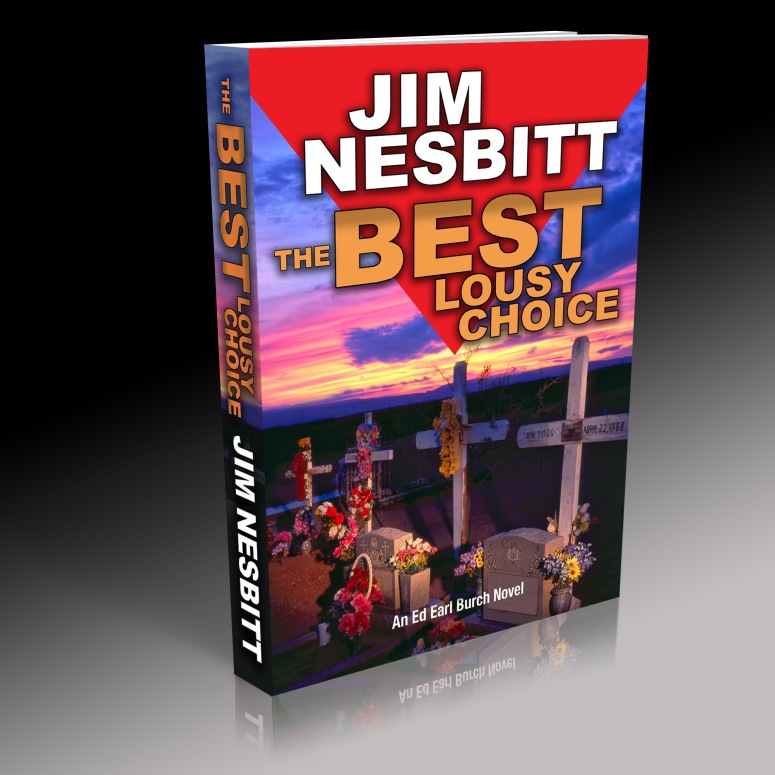 Rave reviews keep rolling in for THE BEST LOUSY CHOICE, my latest hard-boiled Texas crime thriller. Take a look at the latest from one of my favorite writers, Baron R. Birtcher. Then see what all the fuss is about at https://jimnesbittbooks.com. Here’s Baron’s review:
JIM NESBITT’S THE BEST LOUSY CHOICE BRISTLES WITH SO MUCH REALISTIC TEXAS GRIT, YOU’LL HAVE TO EMPTY OUT YOUR BOOTS WHEN YOU FINISH READING
“Suffice to say, that The Best Lousy Choice brings all of author Jim Nesbitt’s considerable talents to bear and puts them on display in crisp, wide-angled focus.
It is Texas, 1989, and Ed Earl Burch, the self-described de-frocked cop and walking paradox is back. A man both clever and intelligent, he also possesses a timeless Western-style sense of justice, unburdened by too much regard as to the methods he employs to keep the scales in balance.
As steady, relentless, and as tough as they come, Burch is a man at much at war with his personal demons as with the narco-traficantes, land schemers, and double-dealers that threaten his corner of the Lone Star State, one boot heel planted firmly on each side of the border, and the law.
Make no mistake, this is an action thriller, a story that rears out of the chutes from Page One and is written with uncommon confidence and bravado.
Nesbitt uses vivid descriptions and sharp dialogue to expertly capture the tones and textures of his settings and weaves in an abundant knowledge of Texas history, all of which conspire to create a narrative that crackles with wit and realism and action scenes that are bold, sometimes outrageous, and strike out at the reader with terrifying (and entertaining) suddenness.
As the author so elegantly and aptly states, Ed Earl Burch’s Texas “is an ageless and unforgiving land of stark and barren beauty, harsh choices and sudden violence.”
If you like your mysteries hard-boiled, your characters rough, and your dialogue tough (like I do), then not only is this the book for you, but it will have you running back to read the others in this series, and pretty much anything else by Jim Nesbitt.”
— Baron R. Birtcher, LA TIMES Bestselling author of literary thrillers